Just having a bit of fun here, posting about walks and other stuff. I need to get out more.

Conscious that the TGO Challenge is looming, I decided it was about time to get out of the house and start putting in a few miles and make a futile attempt to be fit for the start of the Challenge on 13th May.
So, with that in mind I was up early yesterday to do a local walk taking in all four of the Wentworth Follies.

It was spotting with rain when I left the house but the weather forecaster promised better as the day progressed.

Just a few hundred yards from my house is the Waterloo kiln which is all that remains on the site of the famous Rockingham Pottery which operated from here for about 100 years from the mid 18th century onwards.

From here it's just a short walk to Wath Wood where the remnants of "The Roman Ridge" are still intact. The history of this Rig Bank is unclear but it is thought to predate the Roman period and was probably built as a boundary line around 2000 years ago.
Link The Roman Ridge

Once through the wood it is about two miles along lanes and paths to the first Folly, Hoober Stand.
Normally Hoober Stand can be seen for miles around and is the most prominent of the local land marks in South Yorkshire, not yesterday however as the weather had deteriorated to steady drizzle and I did not get sight of it until I was about 100 yards from it.


It's less than a mile from here to the next Folly, The Needle's Eye which, local fable has it was built as a bet by the 2nd Marquis of Rockingham that he could drive a coach and horses through the eye of a needle.


Backtracking slightly, I walked down the road into the village of Wentworth where I then entered the grounds of Wentworth Park and the once magnificent Wentworth Woodhouse which was home to the Fitzwilliam family. The mansion is now privately owned and stands empty and seemingly falling into an irretrievable state of dis-repair.


The next stretch was, in a word...miserable. From the fishing ponds at the bottom of the park the route then goes over fields using a muddy path for about a mile and a half. I passed The Penistone Ramblers going in the opposite direction and from the look on their faces they appeared to be enjoying themselves even less than me. A nice collection of bushy grey beards though!
Once over the quagmire there was some nice woodland which climbs steadily to Folly number 3...Kepples Column.


The persistent drizzle had stopped now...it was pissing it down! so I didn't hang around for long and headed back to the fishing ponds feeling sorry for myself.

From the ponds I picked up a vague path to final Folly of the day.. The Mausoleum

This is apparently open to the public during summer months and I may return on a dry day to have a closer look. 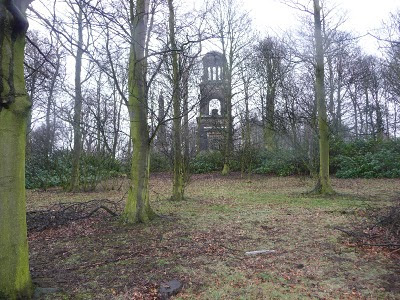 ﻿
I had had enough by now though and got my head down for the final 3 miles or so back to my house and a welcome hot bath.

Points noted from yesterday's walk.
Once dried out, I headed off to Leeds to see Frank Turner play a "secret" gig in a pub. He played this song which sums up how I felt at times during the walk yesterday.


"I lied about being the outdoor type"
Posted by Dave Wood at 15:13